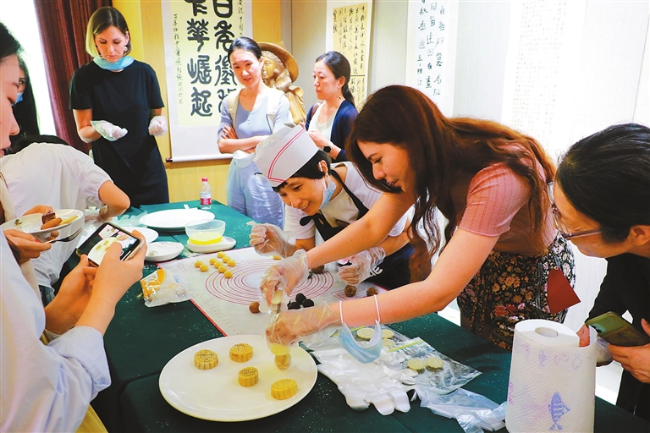 NEARLY 80 international students from the College of International Exchange of Shenzhen University (SZU) were invited to experience Mid-Autumn Festival traditions at the Shenzhen Oriental Art Gallery in Futian District on Friday, days ahead of the festival.

The event was jointly organized by SZU’s College of International Exchange and Shenzhen Oriental Art Gallery.

A short video introducing the festival’s origin and development was played to officially kick off the event.

During the event, international students from more than 30 countries and regions around the world had a taste of a series of Chinese traditions such as traditional Chinese music, making mooncakes, creating papercutting works, drawing on lanterns and writing Chinese calligraphy.

“The lyrics of the Chinese song I performed are very beautiful, which reminds me of my hometown. I experienced the traditions celebrated during the Mid-Autumn Festival at the event. I really enjoy and truly appreciate the school and the gallery for organizing the event for international students like us,” said Aroum.

During the mooncake-making session, international students were seen picking up their mobile phones to take photos of the mooncakes they made and shared them with their hometown relatives.（Shenzhen Daily）